Once upon a time, in a kingdom very far away, there lived a king and a queen.

The king was handsome and kind. Everybody loved him. But the real ruler of the kingdom was his wife — the queen.
‍‍‍
Before she became queen, she worked in the castle kitchen. She was very poor. But she was also very beautiful, and funny, and very good at Scrabble.

So the king fell in love with her, and married her. 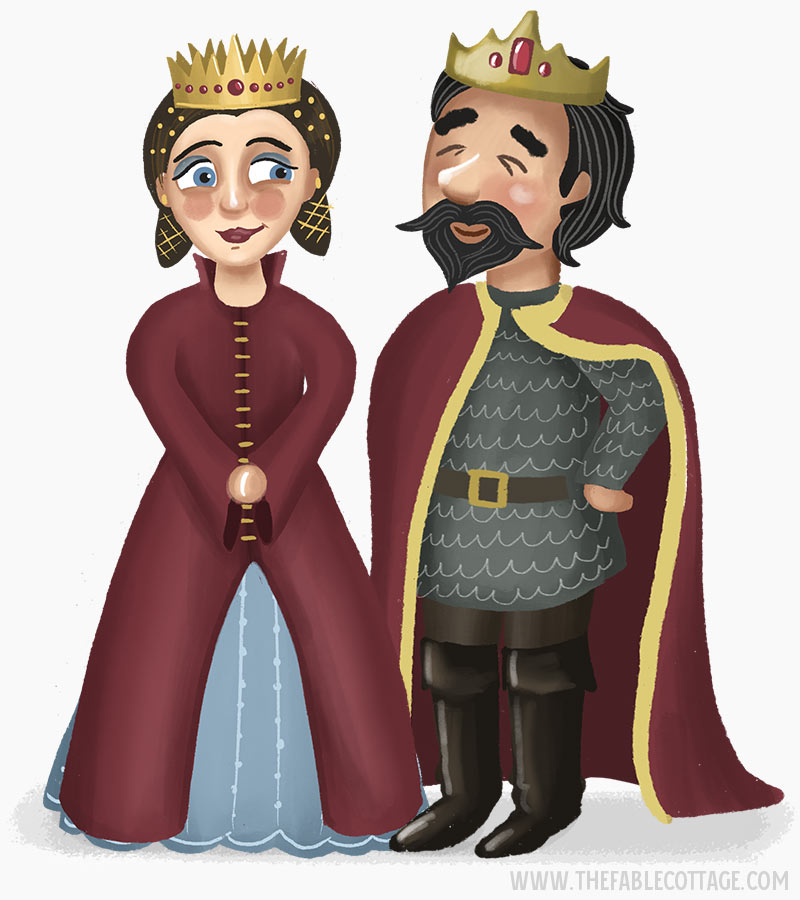 The king loved the queen very much. But the queen was always afraid that the king would meet someone more beautiful.

Luckily, the queen had a magic mirror. The mirror saw everything and knew everything.

Every day the queen looked at herself in the mirror, and asked: “Magic mirror on the wall, who is the most beautiful of all?”

And the mirror replied:
“You are, my Queen! You are the most beautiful woman in the whole world.”
The queen was happy. She knew there was nobody in the world as beautiful as her. 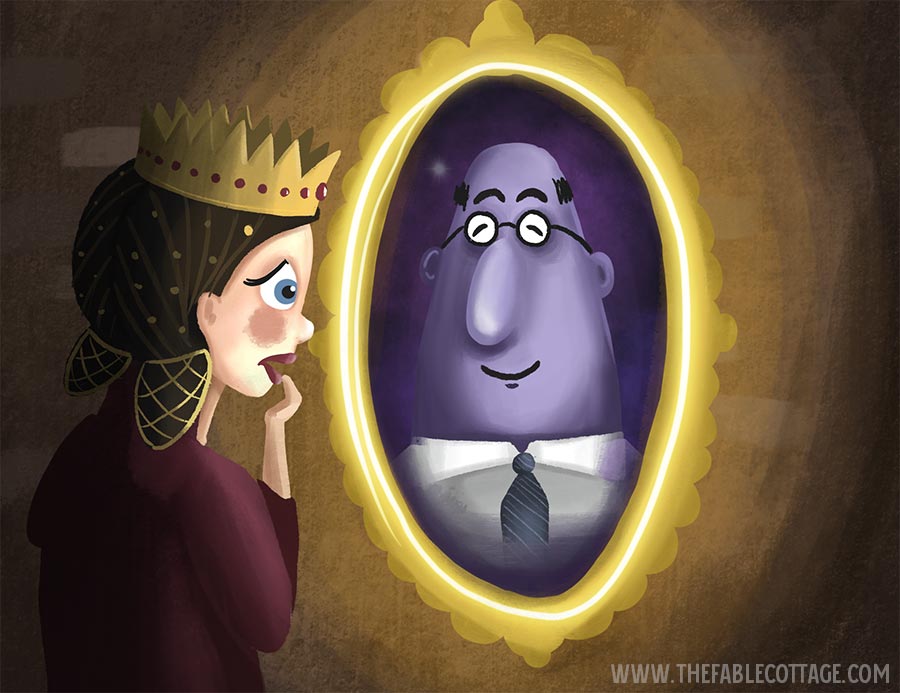 But one day everything changed. The queen stood in front of the mirror and asked her usual question.
“Magic mirror on the wall, who is the most beautiful of all?”

And the mirror replied:
“You are very beautiful, my Queen. But the most beautiful woman in the world is… Snow White.”

The queen was shocked.

“Who is this Snow White?” she asked the mirror.
‍
“Snow White works in the castle kitchen. She has hair as black as night, lips as red as roses, and skin as white as snow. As of… 8am this morning, she is a wee-bitty-bit more beautiful than you.” 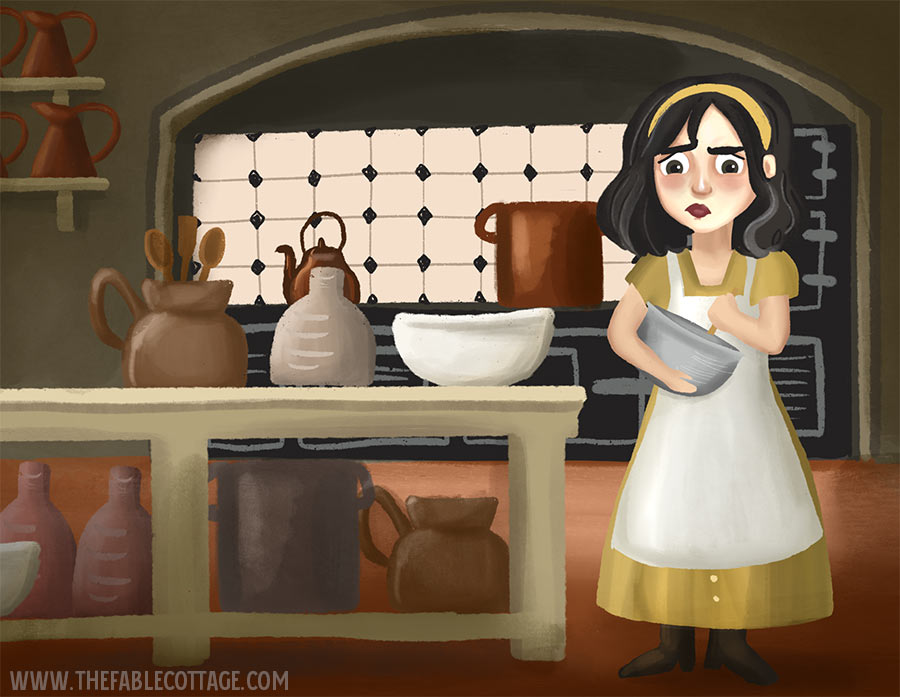 “ARRRGGHH!!” yelled the queen. She stomped her feet. She pulled her hair. Then she sat down and sobbed.
‍
“I will lose everything!”
‍
The queen was afraid, and that fear turned her heart cold and hard.
‍
She called a trusted hunter to her room.
‍
“Find the girl, Snow White,” she ordered. “Take her far, far away. Take her deep into the woods.” And then the queen looked deep into the hunter’s eyes. “She must never come back.” ‍

The hunter found Snow White, and took her into the forest.

When they reached the deepest, darkest part of the forest, the hunter stopped. “Go!” he whispered. “Run fast and far and don't ever go home!”‍ 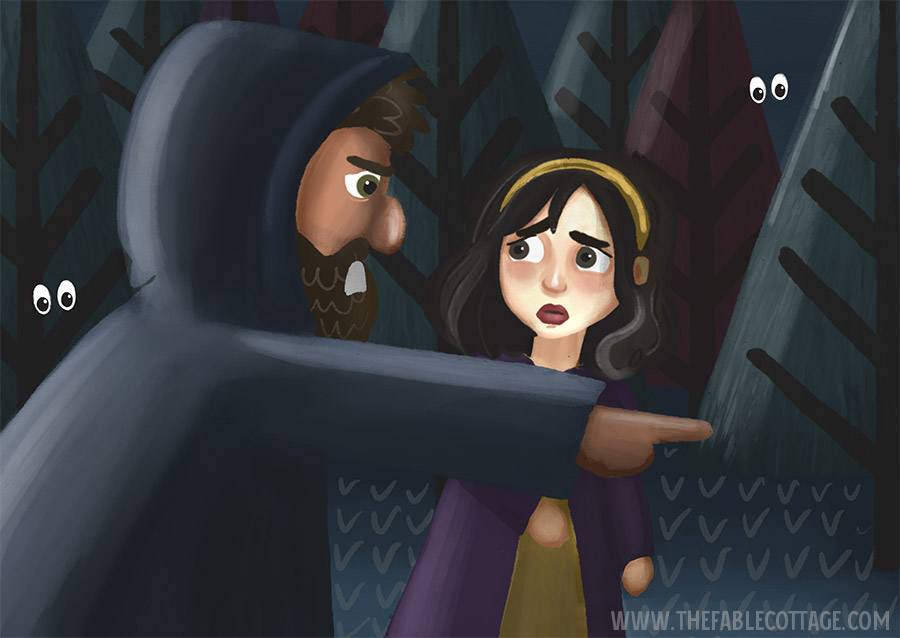 Snow White watched the hunter disappear.
‍
“Well, I can’t go home now,” she muttered. She looked around at the dark and silent forest. It started to rain.

Snow White ran and ran. She ran across a stream, up a hill, and down into a dark valley. She ran all morning.
‍
By midday her pale skin and rosy cheeks were covered in mud and scratches.

By early afternoon her long black hair was full of sticks and leaves.

By night, she was not beautiful anymore. She was tired, hungry, and shivering with cold.

But then Snow White smelled woodsmoke in the air. She followed the smell and found a cottage in the woods. There was a warm, golden glow from the windows. She knocked on the door.

“Hello?” She called out. “Is anyone home?”
‍
There was no answer. She pushed the door open and went inside. 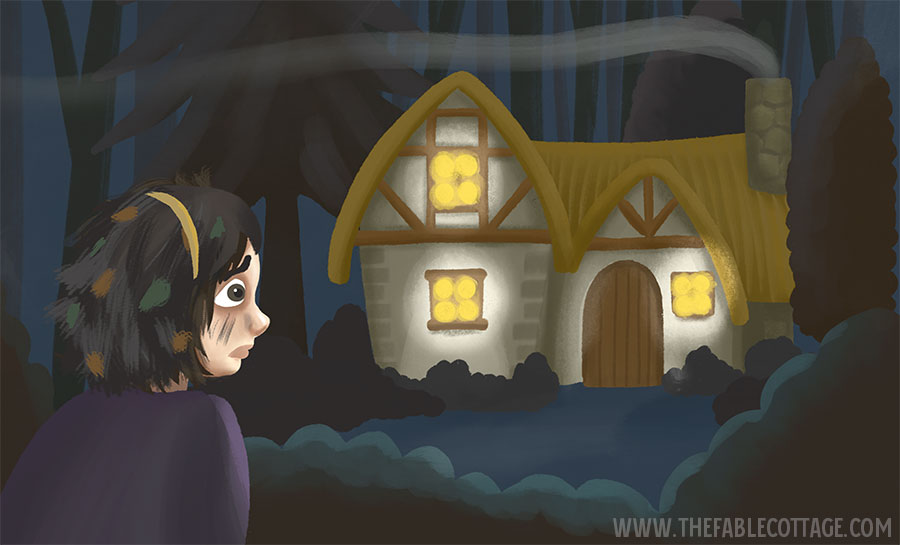 Inside the cottage were seven tiny beds, seven tiny chairs, and a roaring fire. A big table was covered with dirty dishes.

Snow White was very hungry and thirsty. She found some bread, and ate the whole loaf.

She found some milk, and drank the whole bottle.

Then she sat in front of the fire to get warm. And just like that, she fell asleep. 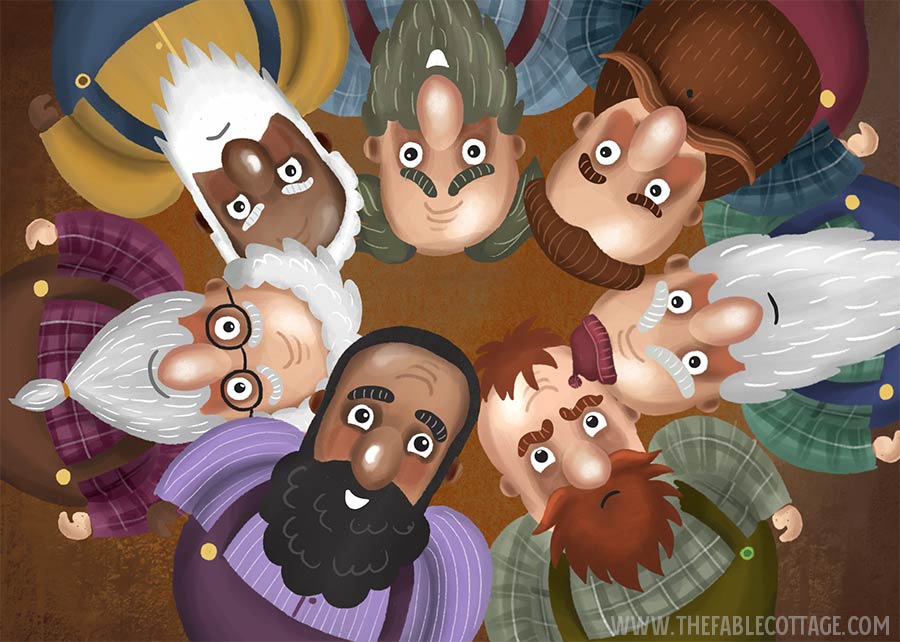 When she woke up, there were seven dwarfs standing around her.
‍
Snow White rubbed her eyes.
“Who are you?” she said.
‍
“This is our house!” said one dwarf, angrily. “Who are you?”
“Shhh, you'll scare her!” said another.
“She’s a giant. She scares me!” said yet another.

“Can I stay with you?” asked Snow White. “It seems I can’t go home.”
The dwarfs whispered amongst themselves.
‍
“Ok,” they agreed. “But only if you help us wash the dishes. We hate washing dishes.”
‍
“It’s a deal,” said Snow White. 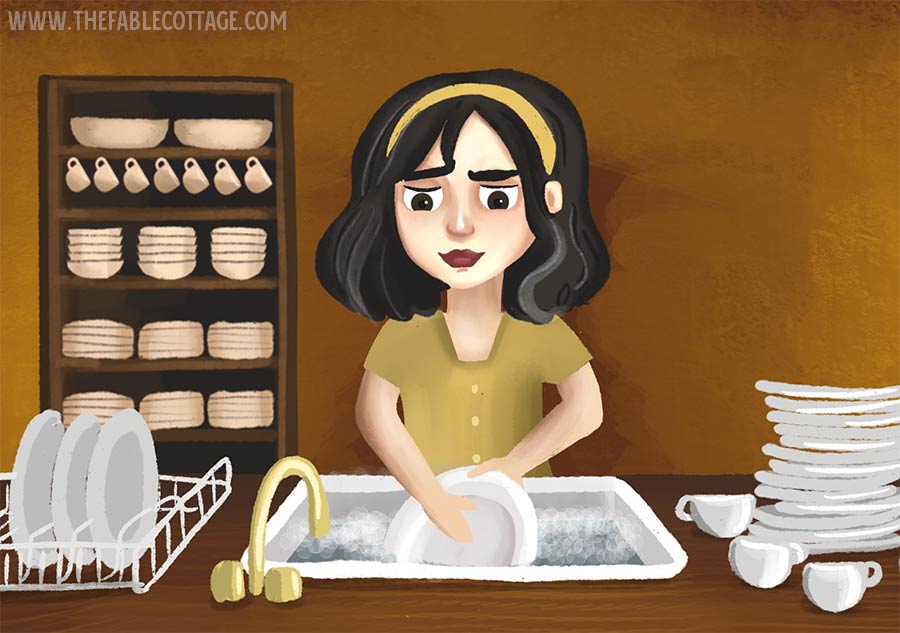 And so, Snow White found a new home with the seven dwarfs.

Every morning she washed the dishes.

And every morning, as the dwarfs left for work, they said “Be careful. Don’t open the door for anyone...

... And thank you for washing the dishes. We really hate washing dishes.”‍

Back at the castle, the queen was feeling better. She thought Snow White was gone forever. But she was still a little afraid.
‍
“Come and play Scrabble with me, my love!” shouted the King from the bottom of the stairs. “You can go first!”
‍
“Maybe later, dearest,” replied the queen. She stood in front of her magic mirror.

“Magic mirror on the wall, who is the most beautiful of all?”

The mirror replied: “You are very beautiful, my Queen. But the girl Snow White is the most beautiful woman in the world.”
‍
“Snow White is ALIVE??” shouted the queen. 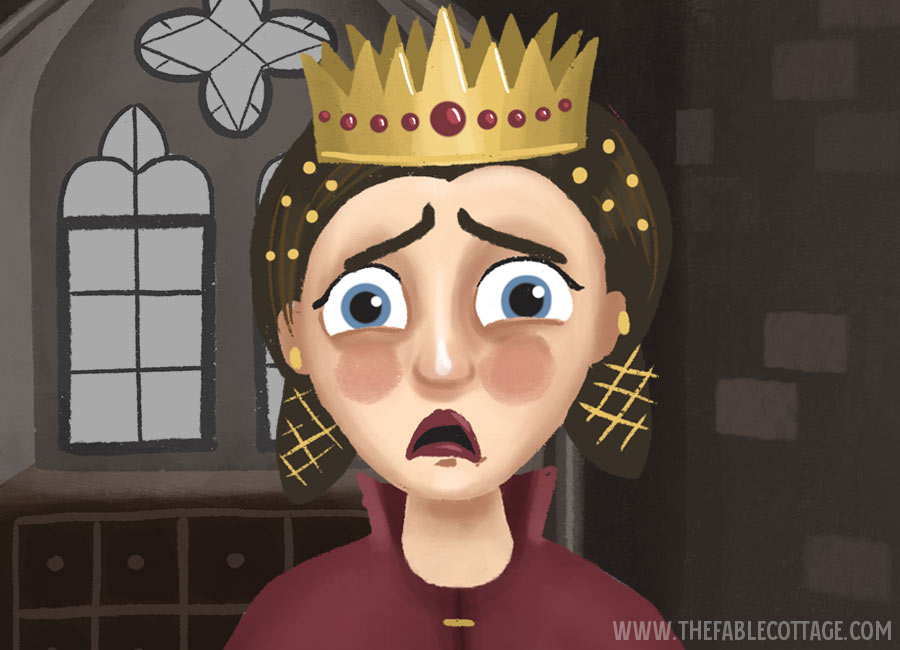 “She is living with the seven dwarfs in the forest,” said the mirror. “Last night, she was not very beautiful. But as of…  1pm today, she is more beautiful than you.”
‍
“RATS!” shouted the queen. She went to her closet and got her old coat and old boots.
‍
“I’ll have to kill her myself!”
‍
She ran out of the palace,  jumped into her fastest carriage, and sped off towards the forest.

Snow White was reading beside the fire when there was a knock on the door.
‍
KNOCK KNOCK!
‍
She peeked through the window. There was a woman holding a basket of fruit. The woman had a beautiful face, but she was wearing an old dress and old boots.
‍
“FRUIT! FRESH FRUIT! APPLES AND BANANAS AND PEARS AND ORANGES!”
‍
“Oh, I want some fruit…” thought Snow White.
‍
The woman saw Snow White through the window.
‍
“Hello dear!” said the woman. “Do you want some fruit? I have delicious apples today.” 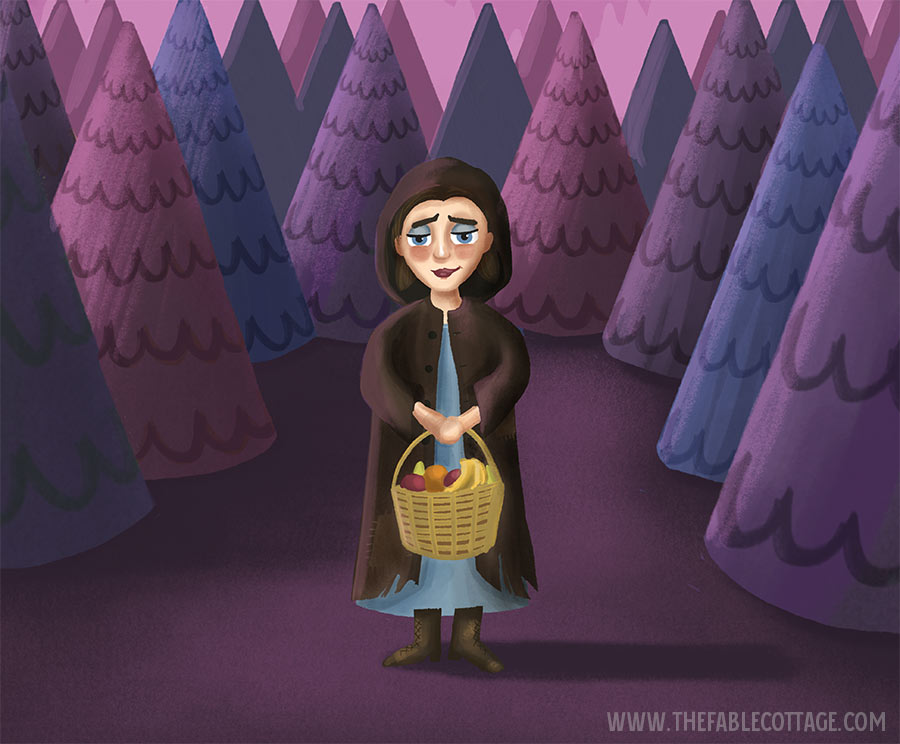 “I love apples…” said Snow White. “But I'm not supposed to open the door for anyone… those apples might be poisoned.”
‍
“Oh, how silly,” said the woman. She cut an apple in half.

“Here. You can taste half, and I will eat the other half. That way you know it’s NOT poisoned.”
‍
Snow White opened the door.
‍
The woman gave one half of the apple to Snow White, and ate the other half. When Snow White saw the woman eating the juicy apple, her mouth watered. She couldn’t stop herself. She took a big bite of the apple.
‍
Almost immediately, Snow White fell to the ground. The apple was poisoned, but only on one half!
‍
The queen sighed with relief. Quickly, she got back into her carriage and rode back to the castle. 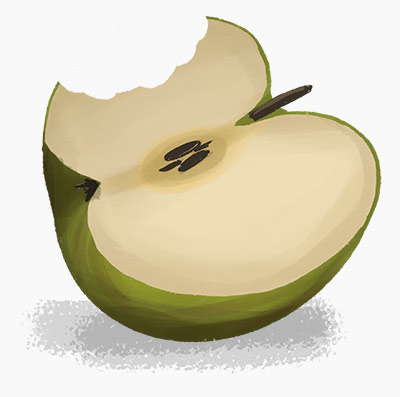 When the dwarfs arrived home, they found Snow White lying on the floor.

They yelled in her ears. They tickled her feet. They poured cold water on her face. But she didn't wake up.
‍
“Is she ... dead?” asked one dwarf.
“She doesn’t seem to be alive…” said a second. 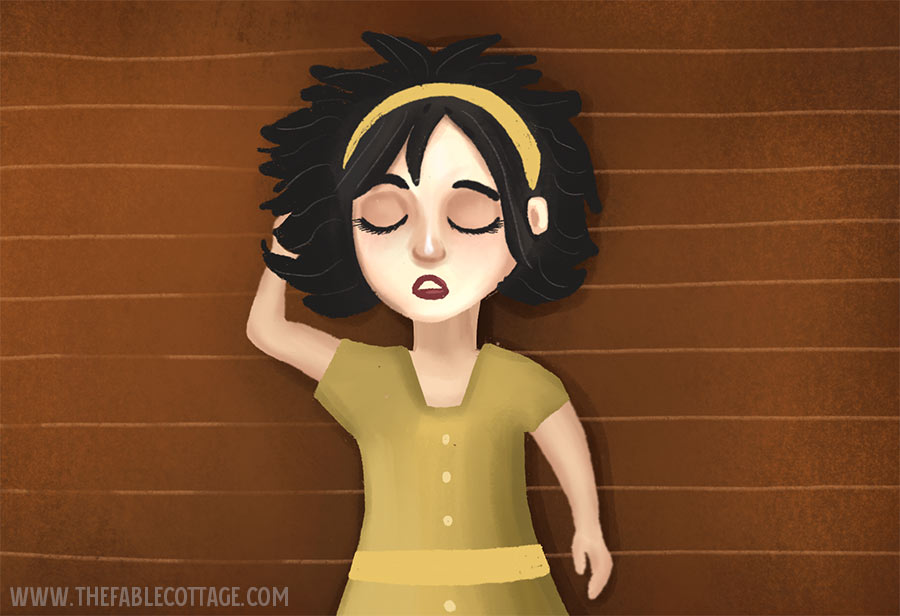 And so the dwarfs made a glass coffin for their beloved friend.

They set it on a table in a beautiful part of the forest, surrounded by flowers.
‍
Snow White lay there for over a year: through spring, summer, autumn and winter. 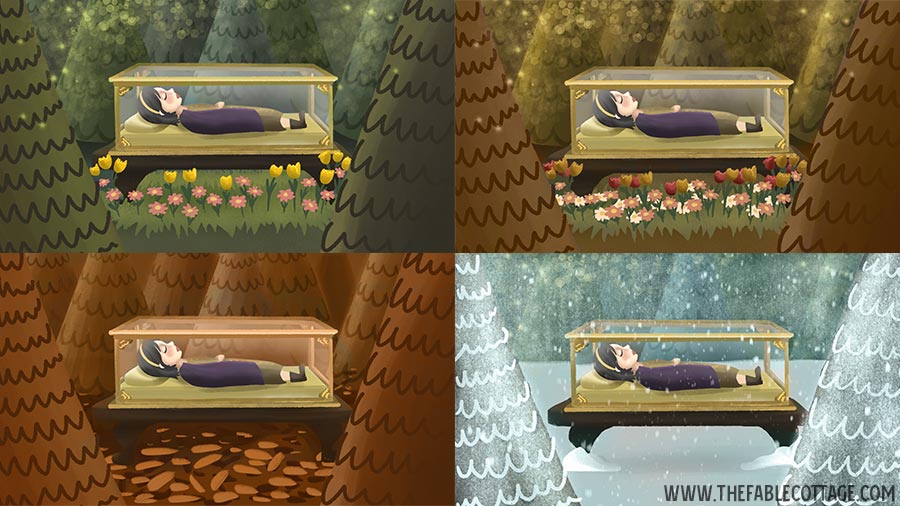 One day, a prince from a different kingdom was walking through the forest with his dog.

Just then, he tripped over his dog and knocked the coffin off the table! Snow White rolled out of the coffin and onto the grass.
‍
“Oh no! Oh dear! Oh ffffffiddlesticks!” the prince shouted. 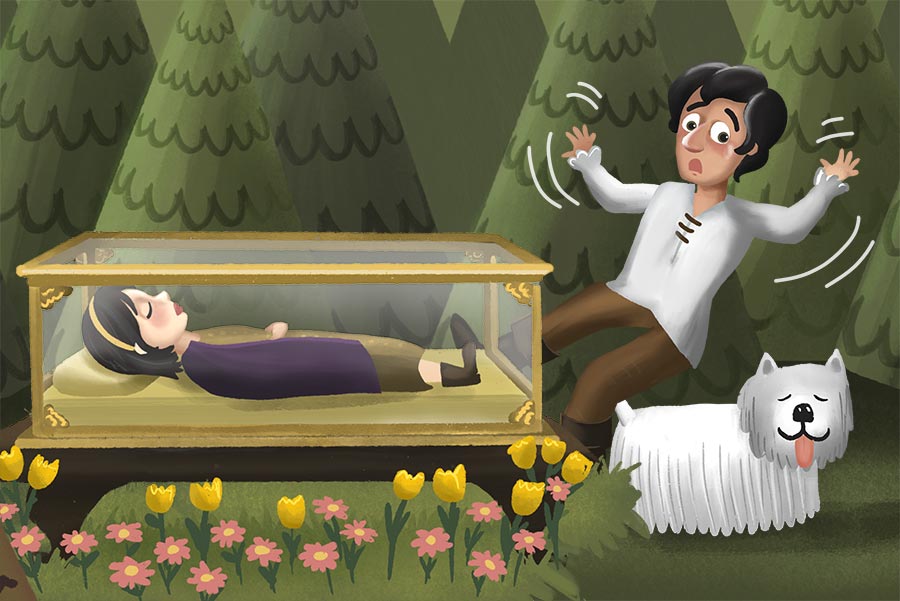 But then an amazing thing happened:
‍
The piece of poisoned apple that was stuck in Snow White’s throat fell out, and she began to cough.

The prince rushed to help her.
‍
“Apples…” she coughed.
“I beg your pardon?” said the prince.
“No .. more .. apples!” coughed Snow White.

That night, the queen stood in front of the magic mirror and asked her question.
‍
“Magic mirror on the wall, who is the most beautiful of all?”
‍
And to her surprise, the mirror said:
‍
“You are very beautiful, my Queen. But... Snow White is again the most beautiful woman in the world.”
‍
“WHAAAAAAT?????” screamed the queen. And in her anger, she picked up a shoe and threw it at the mirror. 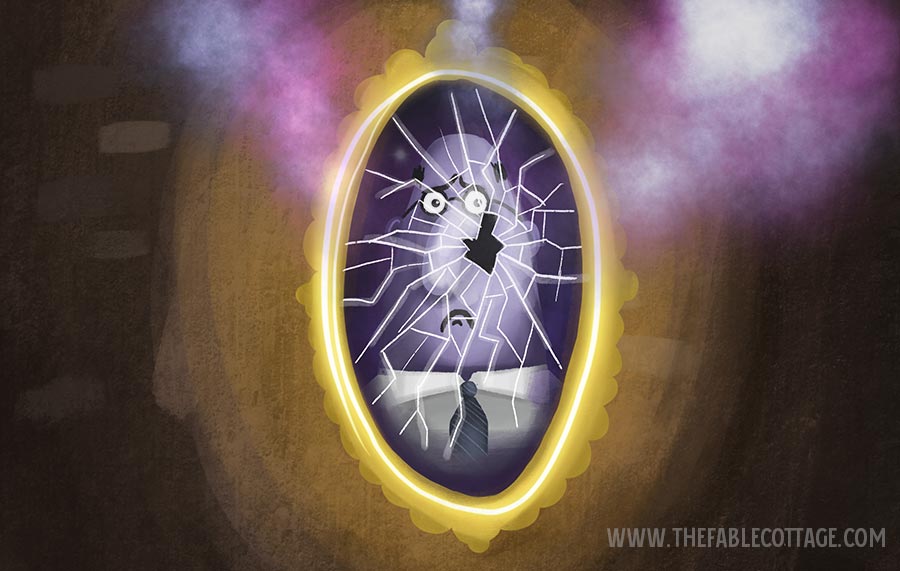 The mirror smashed into a thousand pieces, and the magic inside it was released.
‍
“NOOOOOOOOOO!” screamed the queen.

She collapsed on the floor and fell into a deep sleep.

While she slept, the queen had a strange dream. In her dream, she was dancing in hot iron shoes. Her feet burned and burned, but she couldn’t stop dancing. 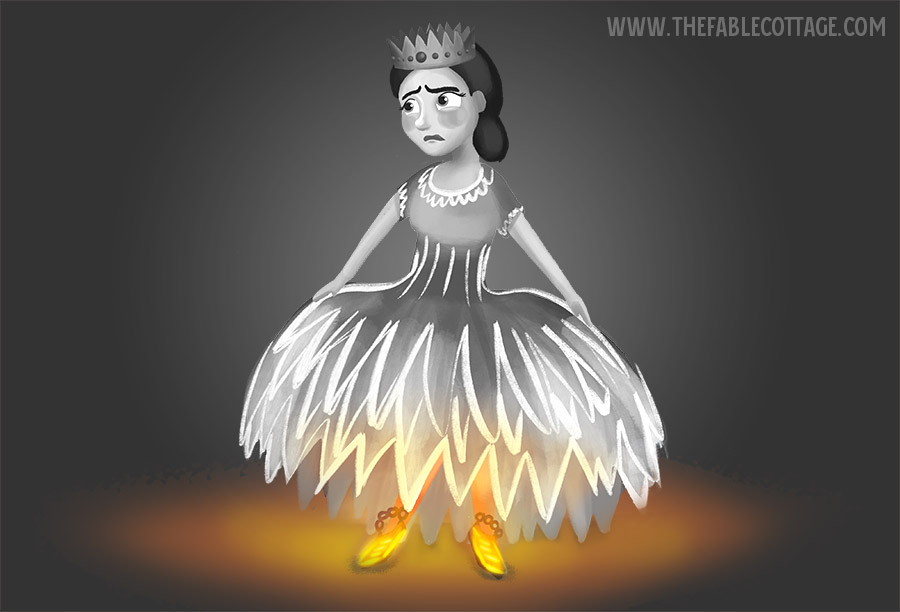 When the Queen woke up from this terrible dream, it was morning. The sun was shining, and the Queen felt ...different.

The magic mirror's spell was broken, so she didn't feel anxious or jealous anymore. She felt free.
‍
She went downstairs to find her husband. She really wanted to play Scrabble. 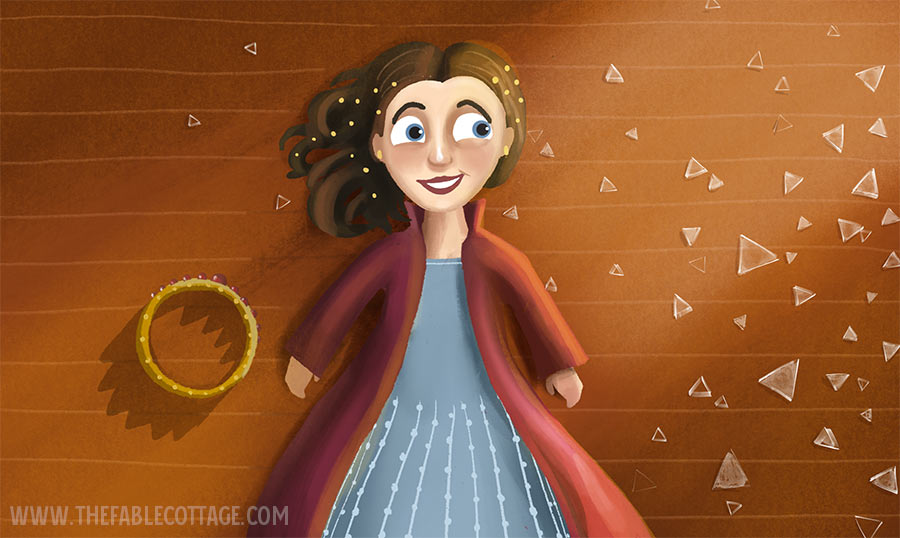 And what happened to Snow White?
‍
The dwarfs were very happy to see Snow White alive. They invited the prince for dinner. When the prince learned that nobody liked washing dishes, he bought them a dishwasher.
‍
Everybody lived happily ever after.