Once upon a time there was a girl named Rapunzel. Rapunzel lived in a tall tower in the middle of a forest. The tower had no ladder, no stairs, and definitely no elevator. There was no way to get up or down. 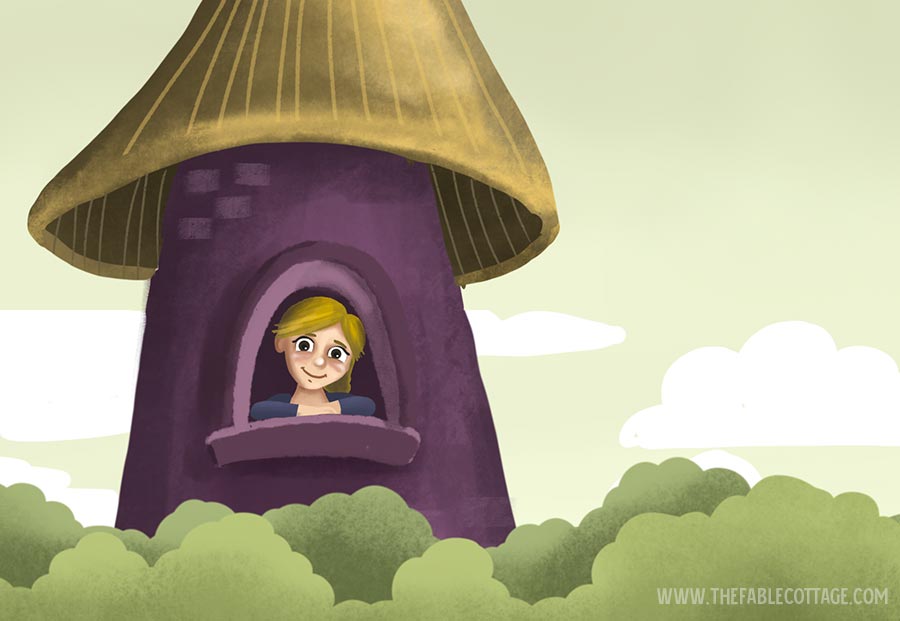 So… why did Rapunzel live in a tower?
‍
Well, it all started with a witch. As you know, witches can be very jealous. They especially hate people stealing herbs from their gardens.
‍
Unfortunately Rapunzel’s mother didn't know this about witches. Many years ago when she was pregnant with Rapunzel, she snuck over the fence and stole some parsley from the witch next door.
‍
The witch saw her stealing parsley. She was furious. She gave Rapunzel’s mother two choices. 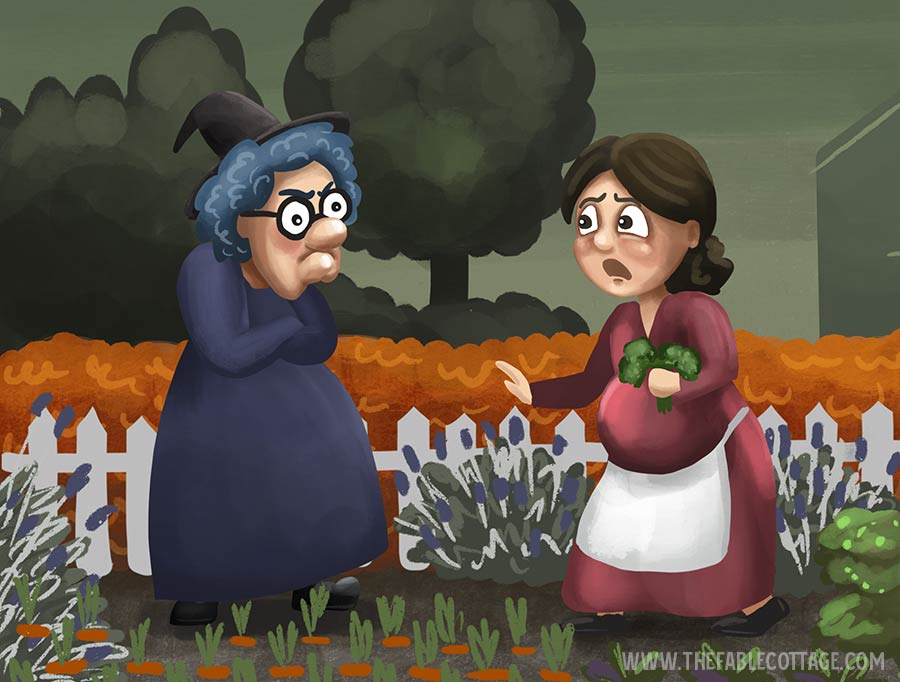 Option one: The witch would curse her unborn baby girl. The girl would always be unlucky. She would meet the wrong people, and say the wrong things, and wear the wrong clothes for every occasion. She would never live happily ever after.
‍
Option two: On the girl’s tenth birthday, she would go to live with the witch. She would be the witch’s apprentice. The witch promised that, eventually, the girl would live happily ever after.
‍
Rapunzel’s mother was heartbroken. She chose option two. And on the evening of Rapunzel’s tenth birthday, the witch came to take her away. She put Rapunzel in the tall tower in the woods.

After that, every day was the same for Rapunzel. She cleaned her room at the top of the tower. She braided her long, long hair.
‍
And every day at lunchtime, the witch came to the tower. She stood under the window and shouted: “RAPUNZEL! RAPUNZEL! LET DOWN YOUR HAIR!” 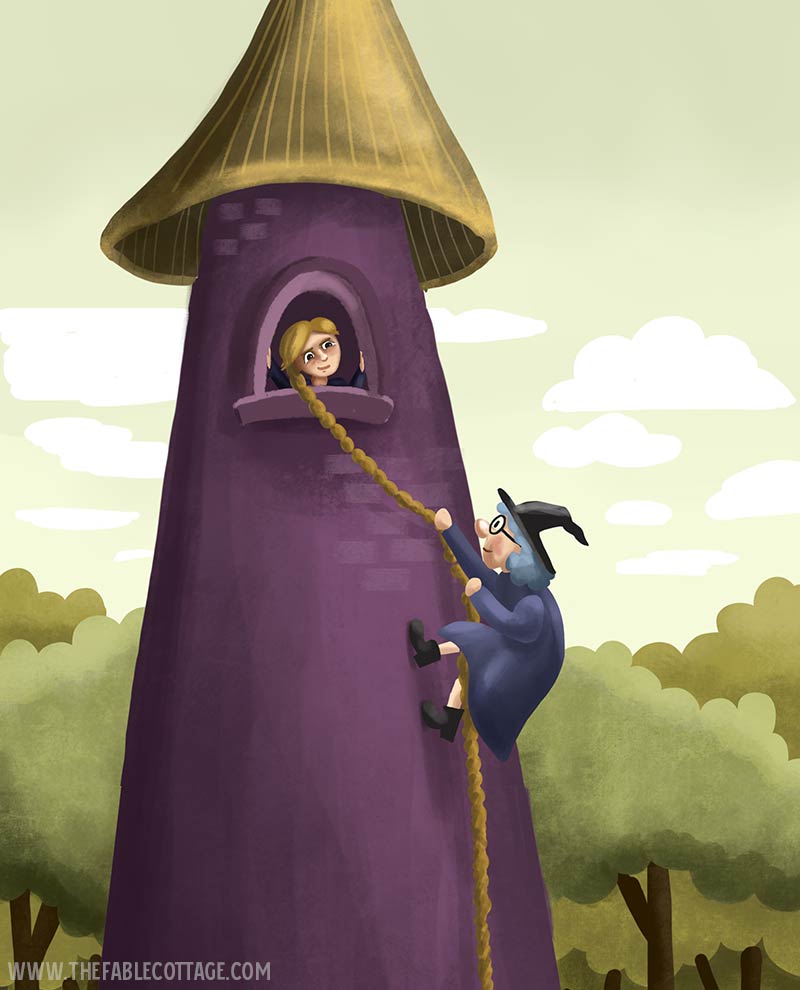 Rapunzel threw her braid out of the window. The witch climbed up Rapunzel’s hair like a rope, and crawled in through the window.
‍
The witch taught Rapunzel how to make medicines with herbs. And Rapunzel loved the witch. She was Rapunzel’s only friend.

One night, Rapunzel was reading a book beside the window when she heard someone below:
“RAPUNZEL! RAPUNZEL! LET DOWN YOUR HAIR!”
‍
“That’s strange,” she thought. “The witch never comes this late.”
‍
She threw her braid out of the window, and the person climbed up, up, up.
‍
But when this person reached the top, Rapunzel saw that it wasn’t the witch. It was a man! 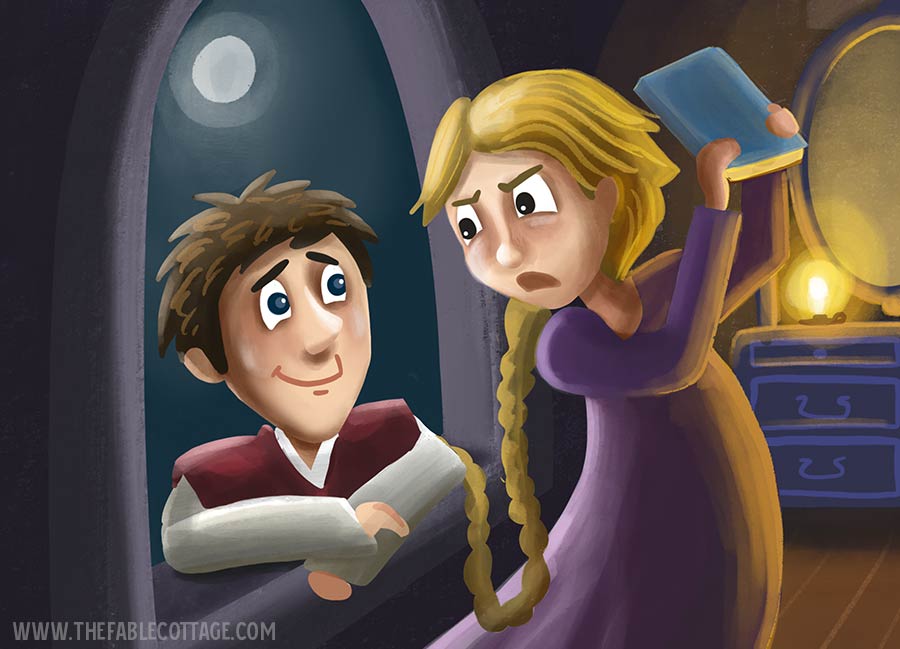 Rapunzel quickly grabbed her book and smacked the man on the head. “Get out! Get out! You’re not the witch!”

The strange man fell to the floor. “Ow! Ow! Stop hurting me!” he begged.

“Who are you? What do you want? Why did you climb my hair?” demanded Rapunzel.
‍
“I’m Justin! My name is Justin!” he whimpered. “I came here to save you….?”
‍
As you can imagine, Rapunzel was not very impressed.
‍
“Tell me, Justin,” she growled. “Does it look like I need to be saved?”
‍
Justin sighed. “I’m sorry. I thought this was my chance to be a hero.”
‍
“What do you mean?” asked Rapunzel.
‍
“My chance to be hero!” said Justin. “Every man needs to be a hero at least once in his life. It’s the only way to live happily ever after!” 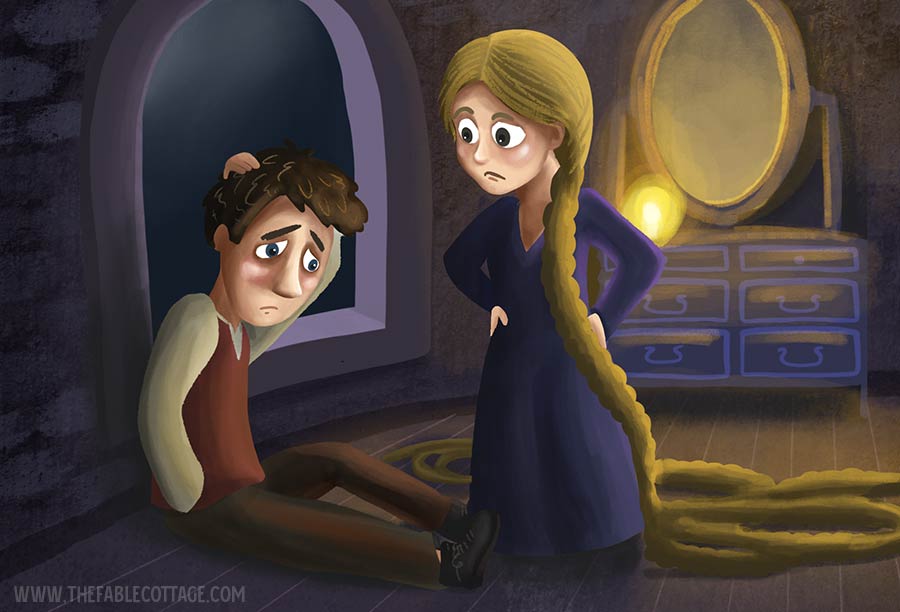 Rapunzel put down her book.
“I don’t need a hero,” she said, kindly. “Go away. Be a hero somewhere else. It’s late. I want to go to bed.”

Rapunzel threw her braid out the window.
‍
“Well, can I come back and talk to you tomorrow?” Justin asked, “you seem nice. Also I brought a rope for you. In case you change your mind one day...”
‍
“Fine, fine,” said Rapunzel. “Goodbye, Justin.” And Justin climbed out the window and down Rapunzel's hair.

The next day, Rapunzel cleaned her room and braided her hair.
The witch came at lunch time. She brought Rapunzel a sandwich and showed her how to make medicine to cure headaches.

But as the witch was leaving, she saw Justin’s rope lying on the floor.
‍
“Whose rope is this? Where did you get it? Do you want to escape?” 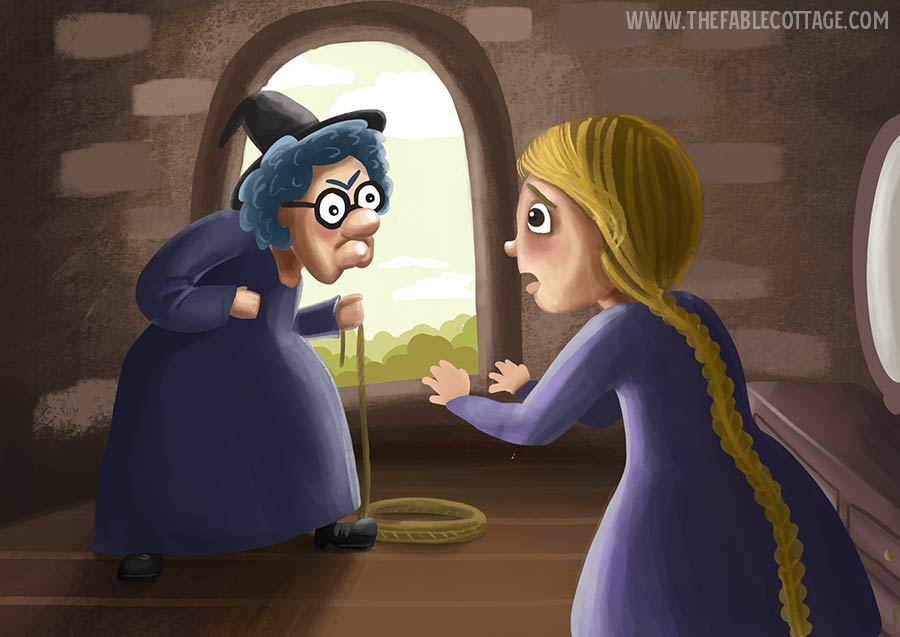 Rapunzel tried to explain, but the witch was too upset.
‍
“I love you like a daughter. Do you really hate me so much that you want to leave?”
‍
“No… there was a man—” Rapunzel said.
‍
“A MAN?” the witch cried. “Fine! Go to him! Go!” Tears poured down the witch’s face. “Go and live happily ever after with this …. man!”
‍
The witch threw some magic powder at the floor, and Rapunzel immediately fell asleep.

When she woke up, she was not in the tower anymore. She was lying under a tree in the forest. Her hair was cut.
‍
Rapunzel cried for ten minutes, and then she stood up and decided to look for her tower.

Meanwhile, back at the tower, Justin returned as promised.
‍
“Rapunzel, Rapunzel, let down your hair,” he shouted from beneath the window. And the hair dropped down in front of his face.
‍
But as I’m sure you know... It wasn’t Rapunzel in the tower. It was the witch!

When Justin got to the top of the tower, the witch pulled him in through the window. 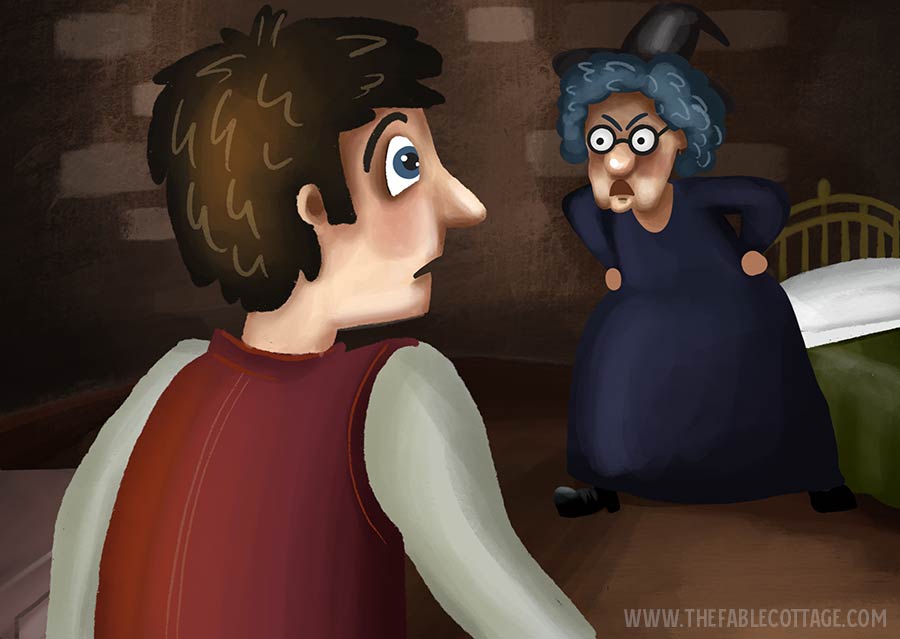 “So YOU are the man who wants to take my Rapunzel!” she said. “I see. Well then. Go and live happily ever after together.”

The witch blew a handful of powder into his face. And with that, Justin was blind.

After walking all night, Rapunzel found her way home. But the tower was gone! All that was left was a burnt circle on the ground.
‍
“Oh nooooo!” cried Rapunzel, and she fell to the ground sobbing.
‍
But then she heard a voice coming from behind some trees.
‍
“Hello? Is someone there? Can you help me? I can’t see. I can’t see anything.” 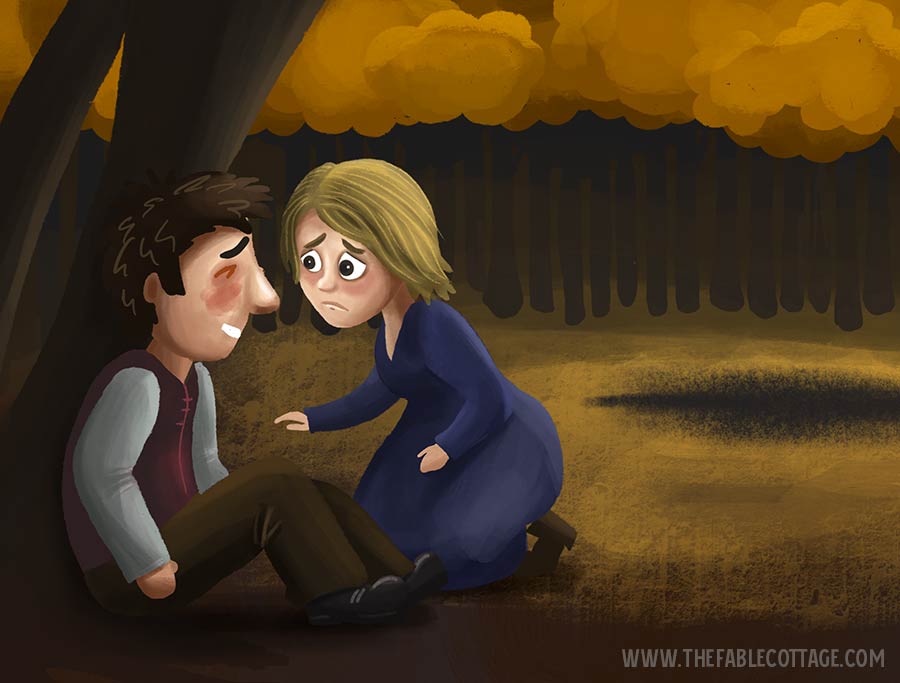 It was Justin. When Rapunzel saw Justin’s blind eyes, she knew what to do.

“Stay right there,” she ordered.
‍
Rapunzel ran into the forest to find some herbs. She ground the herbs and made medicine. Then she put the medicine on Justin’s eyes.
Then... she cried again.
‍
“Please don’t cry…” said Justin, softly. “Why are you crying?”
‍
“My home is gone. My only friend is gone. You are blind—this is a mess!”

For three days, they camped in the forest. Rapunzel made medicine for Justin’s eyes. Justin told her about every time he had tried to be a hero.

Once he tried to fight a giant... but the giant was very kind. He invited Justin inside for tea.
‍
Once he tried to kill a dragon... But the dragon had baby dragons in its nest. Justin couldn’t do it.
‍
Once he rescued a cat from a tree... But the cat immediately climbed back up.
‍
“It’s really hard to be a hero!” he complained. 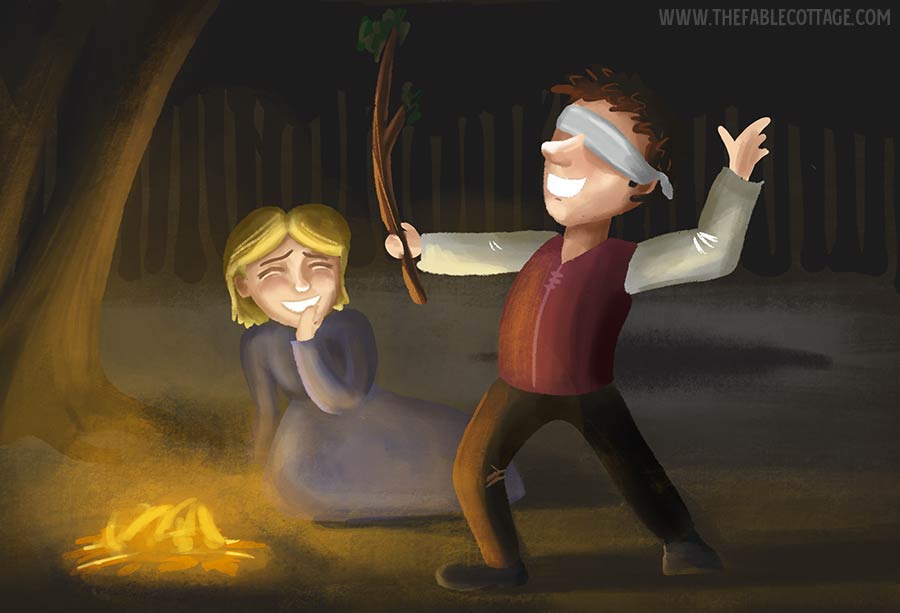 When Rapunzel felt like crying, Justin told jokes until she laughed. When she couldn’t sleep, he listened to all her worries.
‍
On the fourth day when Rapunzel woke up, Justin was already awake. He was looking at her with his bright blue eyes. He could see!
‍
“Thank you, my beautiful friend,” he said. “You fixed my eyes.”

Justin and Rapunzel walked to Justin’s village. Rapunzel liked it in the village. Justin helped her build a new tower, and this time the tower had stairs. Rapunzel spent her days making medicine for the sick people in the village.
‍
Did Justin ever become a hero? Yes, of course! There are many kinds of heroes. But the best and bravest heroes are the ones who help their friends through hard times. And Justin had helped his friend Rapunzel.
‍
In the end, Justin and Rapunzel both lived happily ever after — just as the witch had promised. 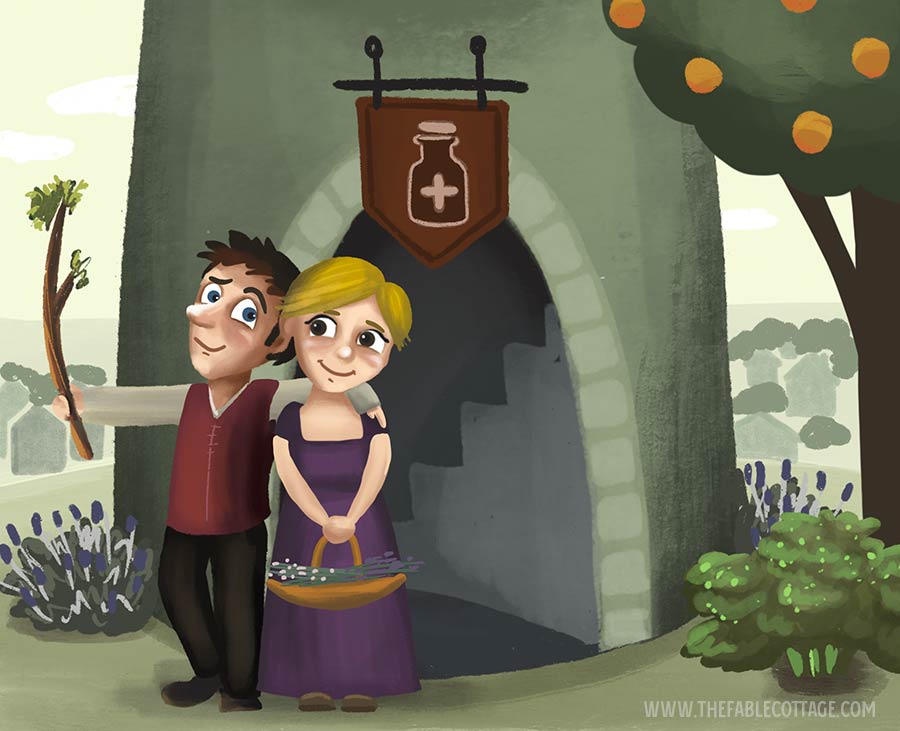